The first engagement for Tirasa was a feasibility study about a IAM solution that, besides application level, takes into account all the access control issues to physical resources, like as car parks and restricted areas. The University has further engaged Tirasa to build a real Physical Identity & Access Management (PIAM) solution. 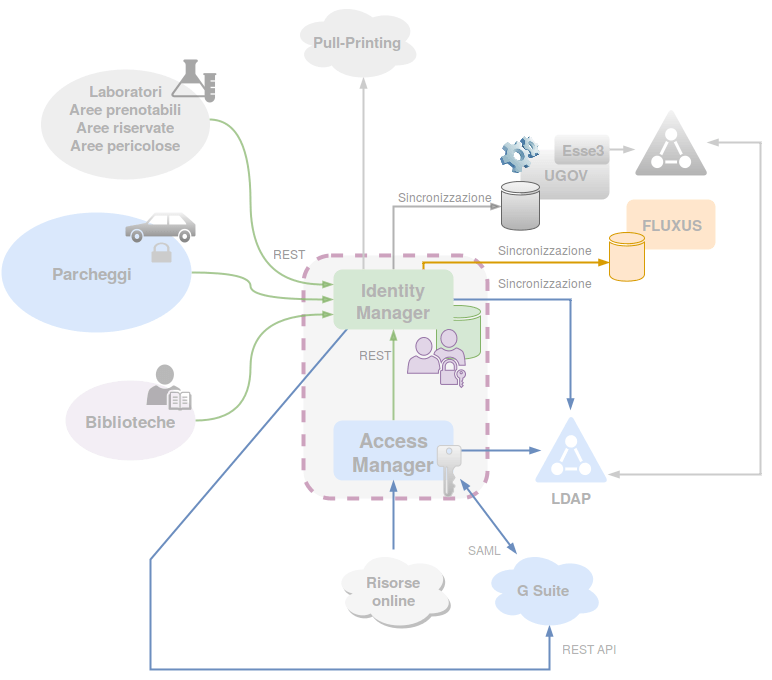 The proposed solution enlists peripheral systems, car parks, restricted areas and libraries, shown on the left side of the figure, that communicate via HTTP(s) with the central system, providing all the functionalities for Identity Management, Access Control and Single Sign-On.

The provided implementation, based on the Open Source Identity Stack, is able to manage users and permissions both on LDAP an, through SOAP, on the physical access control suite Xatlas. 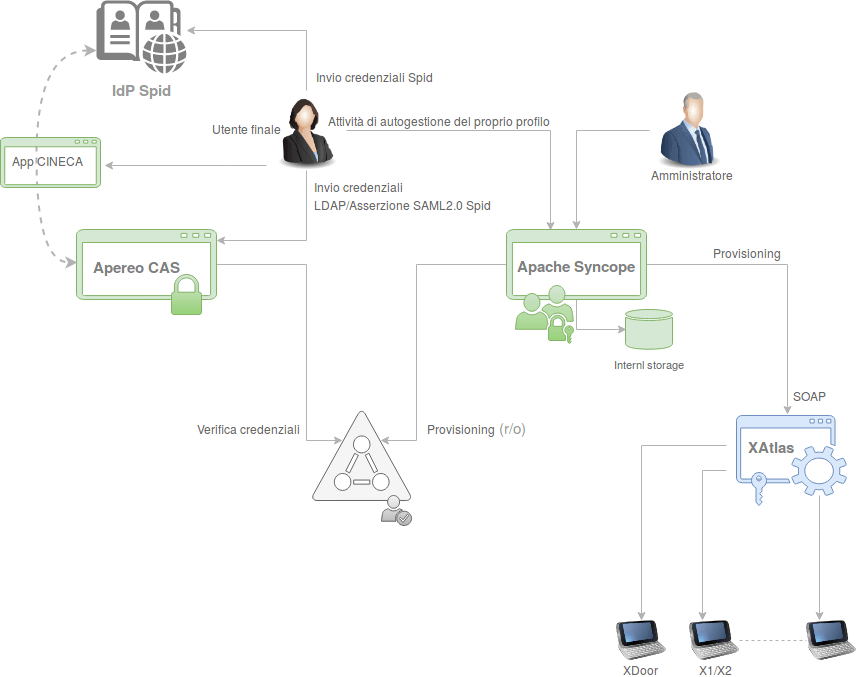 About University of Pavia

The University of Pavia is an Italian state university officially established as a Studium Generale by Emperor Charles IV in 1361.

It is one of the oldest universities in Europe, part of the Coimbra Group (European association grouping 39 universities, some of them among the oldest and most prestigious in Europe, founded in 1985 and formally constituted in 1987).

We have solved complex problems in a simple way
Read the stories of who did already choose Tirasa for digital identities
Azienda ULSS 6 EUGANEA
Healthcare
The overall goal is to renew and standardize user management and the whole process of authorization for IT services.

The solution is based on Apache Syncope with the support of Tirasa for product implementations and customizations.

Esercito Italiano
PA
The Italian Army, through its department dedicated to management, development and security of network and system / service infrastructures, needs to manage thousands of users on heterogeneous sources as Oracle databases, LDAP, Zimbra and Active Directory: the typical scenario which an Identity Management system should rule.

The Open Source selection resulted in Apache Syncope and Tirasa, which provided ts activities to support the Army staff in building the best IdM system possible, for their own specific needs.

Gordon Food Service
Tailored
Tirasa has joined the IDaaS (Identity as a Service) project at Gordon Food Service after an initial phase where access policy enforcement via entitlements was already implemented through Okta. It centralized authentication and authorization features for all company applications, about 400,000 users.

Being aware of how fundamental it is to manage identities and user permissions on applications at the core of our infrastructure, we have started a long-running process to rebuild our approach on top of Cloud Computing and best-of-breed software components, with help by Tirasa to streamline Apache Syncope. (Team Lead at Gordon Food Service)

Istituto Zooprofilattico Sperimentale dell'Abruzzo e del Molise "Giuseppe Caporale"
PA
Distributed on around 20 web applications, the Institute makes its IT services available to several of these internal users but especially to tens of thousands of externals which daily operate on them. With the intention of renewing and standardizing its services, IZSAM has recently highlighted the following specific needs.

After a PoC built by Tirasa and based on Apereo CAS and Apache Syncope, the Institute decided to proceed on this path by engaging Tirasa itself to realize the whole infrastructure.

iWelcome
Tailored
Digital transformation is the key word in today’s businesses. Identity Management is a pivotal element of this transformation, however traditional IAM does not suffice. iWelcome’s Identity & Access Management as a service, provides all the capabilities for organizations to interact with their employees, being inside or outside the organization, towards both internal and cloud applications.

Provisioning is involved with managing the internal data sources and external via specific connectors for representation of users, groups and attributes. This component often needs to be tailored to meet the requirements of a specific deployment. The enterprise support of Tirasa, gave us the manageability, scalability and flexibility to connect and protect millions of consumers at enterprise customers

Nivo1
Tailored
AP Express by Nivo1 is a SaaS platform that provides accounts payable automation, and has experienced significant growth in its customer base, as well as application features. Nivo1 recently embarked on an important enhancement to AP Express: allow customers to authenticate users with their internal identity services.

Tirasa built for Nivo1 a full-blown, integrated, IAM platform based on the Open Source tools as Apache Syncope and Apereo CAS, granting full control, on customer base, to both user lifecycle and differentiated authentication and authorization. This combination of tools gives Nivo1 a distinct competitive advantage.

Currently the whole infrastructure, based on Apache Syncope, manages about 5.000 users, periodically synchronized with HR.

We choose Apache Syncope to carry out the provisioning and account management role as part of our authorization platform, due to its simplicity and flexible adoption to the product needs. Another important consideration was the knowledge and excellent support provided by the Tirasa team

PTC
Tailored
PTC Vuforia is the world’s leading augmented reality platform used by over 200K users worldwide. Vuforia’s Identity Management System was moved from a proprietary solution to one built using Apache Syncope. Apache Syncope was chosen as the Identity Management platform because of the simplicity and flexibility of its REST API and also for its support to import users from various sources.

Tirasa provided timely support and always followed up to ensure that all issues were resolved to satisfaction.

Stichting Bibliotheek.nl
Education
One of the projects was implementing a centralized identity and access management infrastructure. The IAM infrastructure aims to hold all users of the national library in the Netherlands, fed by a continuous feed from the local libraries. This way, all Dutch library members can authenticate and use digital services connected to the IAM infrastructure.

Stichting Bibliotheek.nl is very content with Apache Syncope as a product and intends to extend its services based on it.

SURFnet
Education
SURFnet’s mission is to improve higher education and research by promoting, developing, and operating a trusted, connecting ICT infrastructure that facilitates optimum use of the possibilities offered by ICT.

SURFnet is currently planning how to include Syncope it in its identity management and collaboration middleware for provisioning / deprovisioning needs.

SWM
PA
The Syncope-based solution is initially used in mobile ticketing for public transport customers. Among others, it provides functionality for self-registration, login, password reset, and user suspend/reactivate. The user data is synchronized with other backend systems.

SWM is very satisfied with both the community and the commercial support of Tirasa.

University of Helsinki
Education
Identity and access management is particularly difficult in the university environment because many users have two or more roles. For instance, many students who are close to graduating are also employed by their university departments. In the academic world, many employees have temporary contracts or their work is funded through grants. Because of these factors, it is important that the life-cycle management of identities is not made too aggr...

We have had a few years to get to know Apache Syncope and have gained some in-depth knowledge of its use. For this, the support provided by Tirasa has been a vital aid. We have received help in the form of, for instance, code examples providing a preview of the implementation, as well as solutions to configuration problems and quick fixes to any errors we have discovered.

University of Porto
Education
The U.Porto combines high quality education focused on individual vocations and talents as well as market needs with the claim to being the greatest birthplace of science in Portugal. It is committed to converting into social assets the talent and innovation from its 14 faculties, one business school and over 50 research centres.

Currently, the U.Porto is the most international of Portugal’s universities thanks to its active cooperation with hundreds of higher education institutions worldwide. The ambition now is to establish the U.Porto as one of the top 100 universities in the world by 2020.

UShareSoft
Tailored
The new module allows management of auditing (reports), policies, roles, users, tasks and entitlements. At present UForge uses this embedded IDM service for authentication and role-based access control (RBAC) authorization through special entitlements. The persistence store behind the IDM service is an SQL store and there is a resource connector, connecting to an LDAP V3 Service, for storage of roles, users and entitlements information, in an ...

The UShareSoft UForge Identity management service, is based on Apache Syncope, which was expressly chosen for it's richly defined and complete RESTful API.

Virgin Voyages
Tailored
In the initial scenario, identities from multiple HR systems (including Workday) were set to be transferred to Azure AD via Okta. The situation was problematic for various factors, including almost no control over the process, several potential points of failure and impractical scaling.

Managing the complexity of identity flows across ships and shore is an extremely delicate and involved task: we did choose Open Source software to rule them all. Trusting Tirasa to build our Identity and Access Management system was simply refreshing.